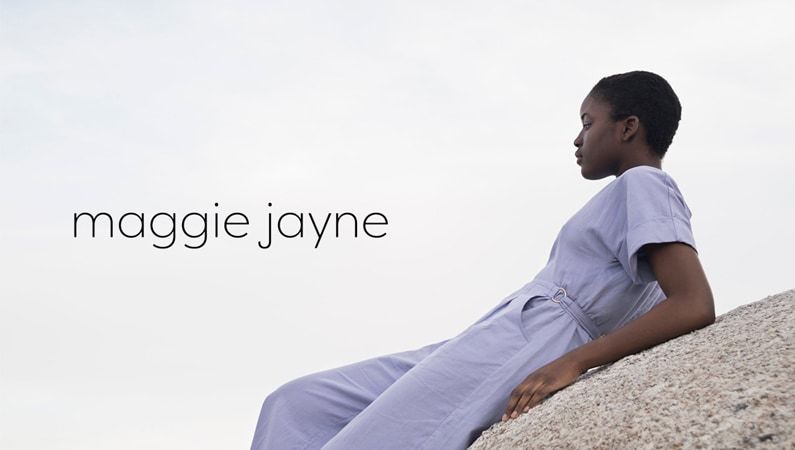 On a rainy morning in late September, Maggie MacCormick is sitting down with a coffee in her Halifax workshop and retail space, across from a bust wearing one of her pieces: a beautifully simple cotton wrap dress, block printed with vertical lilac stripes. Other garments hang off to the side on a rack, artworks of all different shapes and sizes and aesthetics hang on the wall, a work table takes up a big chunk of space beside prototype designs that are her current works in progress. The bright space is filled with the vibrant messiness of design work—the kind of room where there’s only one person in the entire world who really knows where everything is.

MacCormick is the driving force behind Maggie Jayne, a design studio, “imagining deliberately playful, lighthearted and versatile pieces.” It’s an apt description of the clothing she’s produced so far, mostly minimalist, often breezy designs that are refreshing in their commitment to function. They’re meant to be lived in and worked in, and one of her goals for the future is to be consistently producing garments that people will be investing in long-term and returning to for years and years down the line.

Halifax has quite a booming maker culture, which MacCormick is obviously a part of. But she started out a little differently than many of the brands on the east coast. She was cutting and sewing things she could do herself like crop tops before she started the company, and made a few collections of clothes for fashion shows at the Nova Scotia College of Art and Design (NSCAD), which had left her with a catalogue of silhouettes. Shortly after, she was on a trip to India with friends and ended up in a manufacturing hub, where she started following people to the factories and meeting the people manufacturing the clothes. She got some samples made, producing around 200 pieces, and brought them back to Halifax to figure out how to sell them. Instead of building her brand first, she started with the product and has been working on building Maggie Jayne since.

“I had no idea how to sell the clothes,” she says. “I had no audience or anything. So I just had all these clothes in my apartment. They were falling off my shelves. So that was an issue. Then I made a website with an online shop, and I got one order, and it was my friend’s mom. Then I got another order and it was my mom. I don’t know what I thought was gonna happen, but luckily Fred and Joel, they had FRED., the hair salon. And it had this big café on one side that was closing down. They offered us that space over the month of December one year. So I was able to sell everything just to people in Halifax.”

Eventually, Victoire Boutique in Toronto and Ottawa, and Big Pony in Halifax started selling her clothes. After a while of supplementing her income with film work, she committed herself full time to Maggie Jayne around the summer of 2017, after a successful collection and great sales led her accountant to call her up thinking there had been some sort of mistake on the books. When asked about her favourite early moments, her answer is simple—it’s just people wearing the clothes that is so exciting. She even takes a moment to reminisce about a dress she called the Hannah dress, named after her friend Hannah, that was made of a beautiful black silk chiffon that she can’t find anymore. She had been lucky in the first place to find it at a surplus fabric bazaar in Delhi.

Maggie Jayne’s relationship with India is a big part of the brand. Visiting the country remains one of MacCormick’s favourite things about running the company, and she’s taken the time to educate herself on the history of cotton production there, as well as techniques like block printing. In her last collection, there’s a piece made of khadi—a handspun, hand-woven natural fibre cloth from India, the spinning of which was promoted by Mahatma Gandhi in the 1920s for self-employment and self-reliance as part of the Indian independence movement.

“Now we’re working with all local, organic, Indian cotton that’s manufactured in the same region it’s produced,” MacCormick says. “And it’s all fair trade, so the farmers are taken care of. It’s a good situation for the farmers. Then it’s printed and dyed in the same facility that does all the manufacturing for me, and that’s all fair trade accredited. So nothing’s being imported to produce the clothes.”

MacCormick travels to India for months at a time, where she’s able to oversee the manufacturing of her products. “People are willing to make anything work,” she says. “There are no barriers, really. If you want to do business, you can do business. It’s a really entrepreneurial place.” She says that by spending a bit more money, and researching, and going to see what’s happening in the country, she’s been able to make her company a part of a system that operates at a high ethical standard.

“But I feel like somebody else did all that work, and I just found [a manufacturer that] was aligned with me,” she says. “I’m proud of knowing the situation that everyone I’m working with is in.”

Going forward, MacCormick has a quick answer for what her next challenge is.

“Expanding the sizing so it’s going to fit a lot of bodies. Because of financial limitations, I started out just making two sizes, and I designed in a way so they would fit a range of bodies,” she says. “I guess regular sizing will go to a 12 or 14, but it turns out that most women in North America are above a size 14. So doing a ‘regular’ size run cuts out a huge part of the population that just haven’t been invited to participate in this local ethical fashion movement..”

Right now, MacCormick is working on her Fall 2019 collection. With a trip to India scheduled for November, she’ll be working to set up a production cycle and sales schedule that more or less runs itself. She’d like to work her way up to around 30 consistent wholesalers so that orders will pay for production. Once the brand can sustain itself in a more automated way, it will free her up to do more creative work like film projects and collaborations. In the long run, the hopes and dreams, she says, would be manufactured locally and doing the textiles in India, which would create jobs for young people who are looking to get into the industry and allow her to oversee production more easily.

For now, though, there are so many things MacCormick already loves about what she does that she can’t pick just one. When asked what her favorite part of running Maggie Jayne is, she’s got a laundry list ready to go.

“Making my own schedule. Going to India is my favourite part, actually. There are lots of favourite parts. The photo shoots I love. Even though I find pop-ups kind of stressful, it’s really fun. Last time we made this group change room, and it’s so fun to draw so many women into my life, and they’re all having fun with each other, and they’re happy. So it’s sort of the relationship I have with the people who are developing a relationship with my clothes,” she says. “Maybe that’s the best part.”