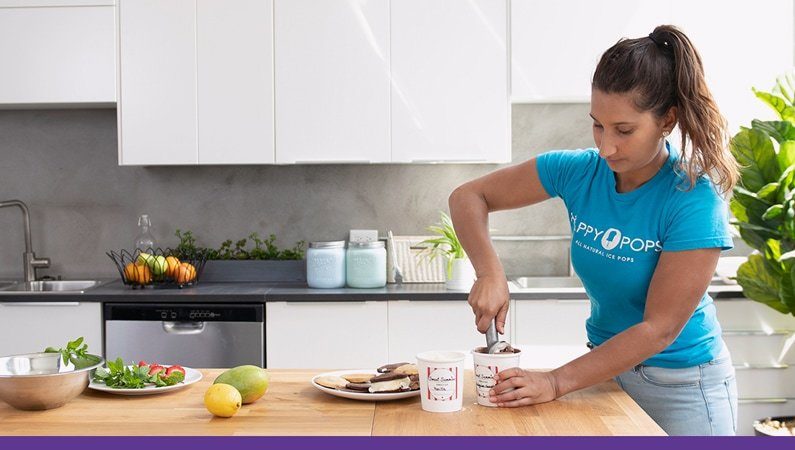 In the hot days of summer, under a sweltering sun, there’s really no better relief than an ice cold popsicle. But most popsicles are packed full of sugar and artificial ingredients, which isn’t so good for you. Like Happy Pops founder Leila Keshavjee notes, sugar has a lot of names, but most of us don’t realize that we can’t tell which ones are good and which ones aren’t.

Keshavjee has figured out a solution: delicious, all natural popsicles made with clean ingredients. She had the idea after finishing her kinesiology degree, when she learned about just how difficult it is for people to be able to keep track of all the different types of sugar that’s added to their food. She started the company as something to do in the summer for fun before going for a masters degree in medicine, but it took off and she realized that Happy Pops was a viable career direction—and it was a lot more fun.

“I was just surrounded by people who were always happy,” Keshavjee says about working on Happy Pops. “Nobody’s upset eating a popsicle or dessert. That’s why we went with the name Happy Pops. I was just constantly surrounded by great people. I always really enjoyed it. And I was like, ‘If I love what I do, why would I do something different? If I could create a healthy product that people also enjoyed, it would have more impact than telling people ‘this is what you should eat.’’”

Of course, it wasn’t just as easy as switching from one thing to the other. Keshavjee’s kinesiology degree didn’t really translate over to running a business, so there was a learning curve at first. She says it was also a challenge to build her brand, figuring out how to differentiate Happy Pops from the rest of the competitors, and getting people to invest in the business.

Luckily Leila was able to do a lot of sample tastings and participate in events where people could try Happy Pops, and eventually people were buying her popsicles into the Canadian winter. She eventually bought the Sweet Sammies ice cream sandwich company in 2016, and that was her in-road to getting Happy Pops in certain retail stores. She could sell to the ones that already carried Sweet Sammies.

Since then, things have continued to grow for Happy Pops. And while they’ve been growing, Keshavjee has relied on Wave for much of her accounting because of its clean interface, which is a friendly and intuitive design that users—even the ones without business degrees—can navigate easily.

“The reports that it allows you to generate are great,” Keshavjee says. “I love being able to see my dashboard and seeing a sales graph of the last twelve months. It motivates you. You see where you stand. You open it up, it’s great to see, it’s colour-coded. You can see who’s viewed your invoice, what’s been sent, what’s been paid. I think it really makes things easy for a small business to take charge of those matters.”

Like many other Wave users, she’s also enamored with the fact that everything she does within the app is so easily do-able on the move. That seems especially important for Keshavjee, given that she’s clearly a busy person—our phone call began with her politely letting me know that she’d be multi-tasking while we talked, but that it was no problem.

“I can’t even imagine what I’d be doing without it,” Keshavjee says. “It allows you to generate an invoice really quickly from your mobile. I could be in another part of the world, I don’t need some fancy software. It really makes things simple in that sense. And because I’m the only one doing that—as an entrepreneur you wear many hats—being able to do it really quickly really helps. And because we do a lot of custom products, we need to be paid in advance. It allows us to get payment really quickly, and makes it easy for our customers to just put in a credit card number on a secure platform.”

And another thing? She doesn’t have to feel awkward about letting someone know that it’s time to pay up. “I can subtly remind people, ‘Hey, you owe me money,’” Keshavjee says with a laugh. “It just makes it so much easier, because you don’t have that awkward conversation about it. They know it’s not paid. And you can just send them a reminder, but it doesn’t feel like it’s coming from you.”

In the short term, Keshavjee wants Happy Pops to grow throughout Toronto, and into Ottawa and Montreal. But she also wants to make the popsicles available all over Canada, and even the U.S. And that seems like a very achievable goal, what with the ace she’s currently got up her sleeve: an appearance on the season premiere of Dragon’s Den, which aired on September 20, 2018. She had to be careful about letting anyone know the outcome, but she was able to talk about the experience a bit.

“It was such a mix of emotions,” Keshavjee says. “It was such an unreal experience. I think it’s something I’ve dreamed about for so long, and I was really nervous. So it’ll be interesting to see how it looks. But it was really cool.”

Time will tell whether the Dragons decide to get in on the delicious Happy Pops game. But whatever happens, Keshavjee’s experience on the show pushed her to understand her business better, and to realize how far the company has come from the little dream of healthy popsicles it started as. And as an entrepreneur, sometimes it can be really encouraging to look back at where you came from.

“There are always all these goals, and you always want to set the bar higher and higher, and you’ll never be where you wanna be, but that’s what keeps you going,” Keshavjee says. “When you have to do something like this and you have to sell yourself, you have to look back and say, ‘Hey, this is why my business is the best thing. This is what it offers, this is how many people have consumed it.’ And that’s when you’re like, ‘Oh wow. Look what I’ve done.’”