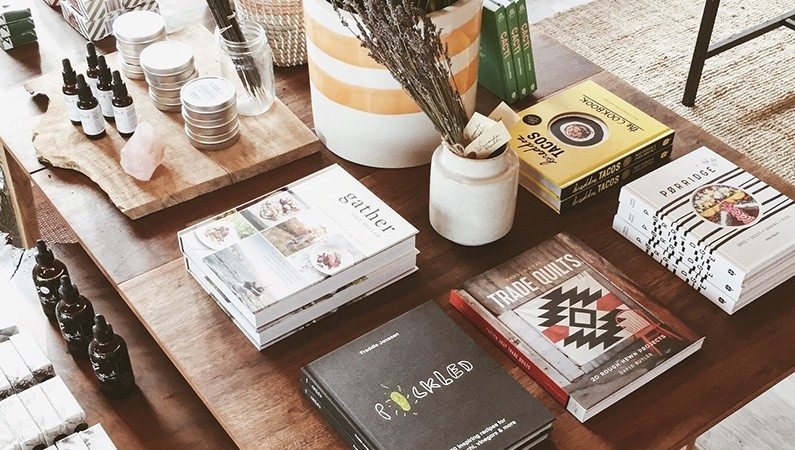 Public General Store is nestled in the heart of West Broadway, one of Winnipeg’s most vibrant neighbourhoods. Packed with fresh flowers, vintage clothes, gorgeous housewares, cleaning and personal care supplies and Public’s own brand of scents and candles, the shop certainly makes good on the ‘general’ part of its name. There’s a lot to find there. But the products are also hand-picked or hand-made with all-natural ingredients, and sourced from small-batch makers. Owners Olena Kozel and Erin Ahl will testify, these makers create products you can count on to be well-made and of excellent value—in short, your sweet new woven bag or patterned cushion is not going to fall apart at the seams.

“That’s our big thing,” Kozel says over the phone from the shop. “Because if we’re going to put something at a higher price point, it has to be worth it. We can sell that to a customer because it’s going to last long. It’s not made of something that’s going to fall apart.

Kozel and Ahl had found the perfect space for Public before that big thing—selling items they knew their customers could count on—was a thing at all. Each of them had dreams of owning their own business one day, and their respective creative visions just happened to be the right fit. So when the building went up for rent, they jumped on the chance without initially putting a ton of thought into how exactly they were going to work with it. They drew up a business plan more or less overnight. There were, understandably, many other people lobbying for the space, but the landlord liked their idea—something that could help contribute to the community, “and not just like, a vape shop,” Ahl says.

The biggest challenge on the road to opening was simply, well, actually opening. Paying rent out of pocket on a space you’re not making money off of is tough, but also getting things ready and unlocking the doors was a difficult hurdle.

“You think you’re going to open at a certain time and then three months later you’re finally opening,” Kozel says. And while the shop has since become more of a well-oiled machine, things like timing orders in the beginning was something that took a while to figure out. “We’re still learning,” Ahl says with a laugh.

Keeping customers on their toes

Now, a couple years later, the challenge is keeping things fresh and exciting. Instagram stories have been working wonders for their promotion, as they can post a story showcasing new vintage finds—one of a kind, of course—and people will rush down to the shop to snatch ‘em up. It makes sure, too, that the store isn’t sitting stagnant. They’re always trying to show their customers something different.

“You always wanna be trying to get something that’s a little new, or a new brand, to introduce every little while so it brings people back into the store, Kozel says. “I think we’ve done a pretty good job. We sell fresh flower bouquets, so we now have people who regularly come every few weeks. They re-up on flowers for their house and get to see the new stuff we have. And then we do our cleaning product refill station, so that’s another thing you need all the time.”

While this kind of general store has been popular for a while in bigger cities in Canada—they’re a dime a dozen in Toronto, where the city’s bougie Drake Hotel has its own right across the street—Public is the first of its kind in Winnipeg. A lot of Winnipeggers rue the fact that trends seem to hit the Prairie town a little later than they do in bigger markets, so Kozel and Ahl figured that might work to their advantage.

“We hoped because of the fact people complain that Winnipeg isn’t up on these sorts of things yet, we could take that chance and get support,” Kozel says. “Because people are really reverting back to wanting to support makers and small-batch products now, and not mass-produced things, and things that are bought directly from the person who makes it, instead of being passed through a middleman. So they’re actually making money off their product in full. And it’s really nice because we can actually have a relationship with the people we buy stuff from. We actually talk to them and get to know them on a more personal level.”

Keeping things ‘general’ has also allowed Kozel and Ahl to branch off in whatever direction they want, focusing on self-care and home products, while also selling local zines or band pins or preserves. Plus, the shop’s physical location means they can act as a hub, hosting the work of local artisans on a more permanent basis than something like, say, a pop-up. It’s also left them open to explore what they can do with their brand, which is a newer incarnation of the Public persona.

So far, the biggest problem with their own line of products is that they can’t make more of them fast enough to satisfy demand. But that’s another kink they’re working out. They’ve got a bunch of scents named after beloved songs—”Lady Stardust” by David Bowie, “Strange Magic” by ELO—and the flagship one is Badlands, inspired by the 1978 Springsteen tune. Badlands has been so popular in the neighbourhood that it’s hard to go to the other businesses on the block and not smell it.

“We’ve really contributed to the scent of our friend group,” Ahl says.

“Everyone at The Handsome Daughter smells like Badlands,” Kozel adds with a laugh.

The Handsome Daughter is a scrappy bar down the way, owned by pals of the shop. Across the street is one of Winnipeg’s most delicious restaurants, The Tallest Poppy, owned by Talia Syrie, who Kozel says has been a major source of support for Public.

Life on their block of Sherbrook is a bit of a family affair—they know most of the business owners by name, people look out for each other. The bars and restaurants and shops face many of the same neighbourhood challenges together. It’s an environment conducive to the future of Public as Kozel and Ahl see it: wholesaling the products under their brand name, getting them into different shops in different cities, building their online presence, and continuing to be business owners for “however long forever is.” And, as they both say, the whole ordeal has yet to test their friendship. In fact, speaking to them now, I get the sense every day feels like a gift. Ahl says that after years of working jobs she hated, it’s surreal to have something she’s so proud of.

“Still, every day, we’re so excited about it,” Kozel says. “I think that rubs off on other people.”

“I wake up every day so excited,” Kozel says.

Matt Williams is a writer, photographer, and journalist based on Canada’s breathtaking east coast.

From bored to boss: Four entrepreneurs share how they took the leap
Passion over practice: How 20-year-old Riley Millican excels as an entrepreneur