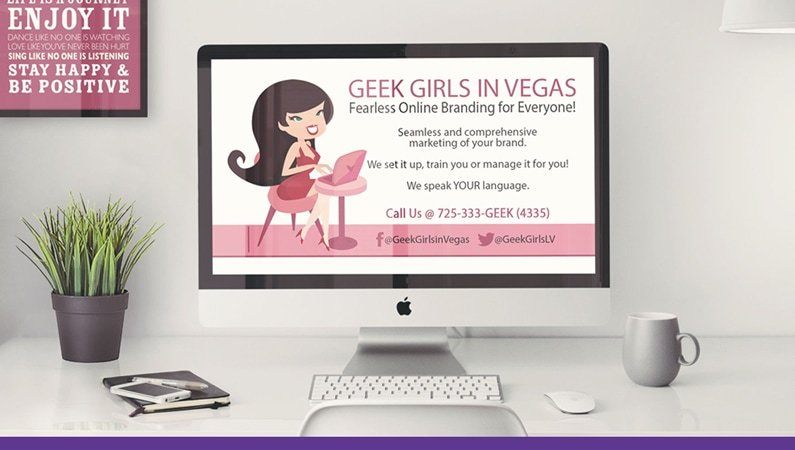 Many creative types have trouble reconciling the business side of things with the artistic side. A singer doesn’t necessarily want to learn how to build a website, and a dancer might not be tech-savvy enough to do his own graphic design. But, if you want to make a living as an artist, those are tools that you need—unless you can find someone you trust to do it for you.

Lisa is a veteran performer, but she’s as geeky as they get. And when we say veteran, we mean veteran: Lisa left Delaware at 18 to pursue her dreams of being a performer, and she’s been doing just that ever since. She started Geek Girls In Vegas after noticing a need for a service with people who were not only tech-literate and computer smart, but also understood things from a creative perspective. She handles websites and graphic design for clients, while freelancer and friend Karen Michaels works on social media and online marketing.

“In addition to being performers, we’re also geeks—we love technology,” Lisa says. “I do graphic and web design, which started from being a performer and creating my own website and promotional materials. And then friends just started asking me if I could do it for them as well.

What you see is what you get

Lisa is an artist herself, of course, and while she’s certainly geeky about some things, accounting is not one of the things she’s that interested in. So she was looking for a tool that could make her invoicing and accounting easier. When she chose Wave, one of the reasons was that, as an artist, she can appreciate the price point and the fact that there are no hidden fees. That’s a big deal, because fair pricing is important to her—without reference points for the time something takes or what it might usually cost, it’s easy for artists to get gouged by companies taking advantage of them. And Lisa is out to give her clients a fair shake.

“When I use the invoicing, I type everything out very clearly,” Lisa says. “They can see exactly what I’m going to do in the memo, exactly what I’m charging them for. There are no hidden fees. There’s nothing that isn’t easily understandable or seen.”

When Lisa was starting Geek Girls, one of her biggest challenges was overcoming Imposter Syndrome, that creeping feeling that no matter how good or experienced you are, or how much research you’ve done, someone is going to reveal you for the amateur fraud you really are. It’s pretty common in every field, but especially creative ones—it’s difficult to believe that you’re right for a job because your bona fides are sometimes intangible. But working with Wave’s invoicing system helped make Geek Girls look professional, which in turn bolstered Lisa’s confidence when interacting with clients.

“I tried several different invoicing products before, and I loved that you were able to customize the Wave invoice to look exactly how you wanted,” Lisa says. “I could get as creative as I wanted—my own branding, my own colours, my own logo, all those kind of things. It didn’t look so business-y. It looked professional, but it didn’t look so sterile. So I knew I’d be able to create it in a way that would appeal to my artist clients as well.”

Over time, the goal became making her whole system efficient. Being able to organize her business in a way that allowed her to streamline invoicing has saved her a ton of time, whereas before, working in Word or with a spreadsheet would just set her back.

“If it’s a type of work I do a lot, I’ve already got it in the system,” Lisa says. “So, this is how much a basic website costs, and then I’ve got a section where I can customize the memo. I can duplicate a previous invoice if I’m doing something similar for another client, and then just change who I’m going to send it to. That makes it easy. And I’ve been able to invoice somebody on the go when I have to via the mobile app, which is also nice.”

And getting paid is nice, too: “They can do it right from their phone,” Lisa says. “I’m collecting payments now a lot more quickly than I was before.”

On the road again

Lisa still performs, of course, and runs Beyond Talent Productions. She plans on hitting the road with her husband soon, travelling the country and wowing crowds along the way. And Wave has helped make that dream a possibility. With her business set up to run from the road, Lisa can take payments and send invoices via the mobile app, and create a rhythm that allows her to do what she loves at the same time as, well, doing another thing she loves. And that certainly sounds like something worth singing about.