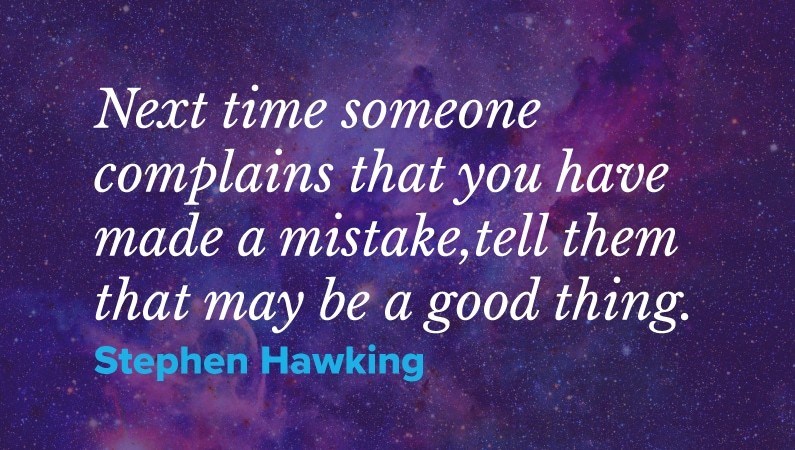 When world-renowned cosmologist, theoretical physicist and author Stephen Hawking died at the age of 76 this past March, the world mourned the passing of one the most celebrated scientists and greatest minds we’ve ever known.

Hawking’s theories and research revolutionized our thinking about the origins of our universe. Many referred to him as the smartest man on Earth. The fact that his ashes will sit in Westminster Abbey next to the remains of Sir Isaac Newton and near those of Charles Darwin would seem to bear that out.

It turns out, unsurprisingly, that there’s a lot you can learn from such a smart guy; not only about the cosmos, but also about life in general. So even though Stephen Hawking wasn’t primarily a businessperson, here are seven things his life can teach you about running your own business.

Don’t always listen to the experts

When Hawking was diagnosed with a rare early-onset form of amyotrophic lateral sclerosis (ALS, also known as motor neurone disease or Lou Gehrig’s disease) in 1963, when he was 21, his doctors initially gave him two to three years to live.

He was in his final years at Oxford, looking to pursue a Ph.D. The diagnosis sent Hawking into a deep depression. He felt there was little point in continuing his academic work if he likely wouldn’t live to finish it.

However, the doctors were wrong. Hawking’s ALS progressed much more slowly than anticipated, and as we know, he lived to be 76 and accomplished a great deal.

This is not to disparage the doctors, of course; they surely formed their diagnosis from the best information at their disposal. But even the best experts can sometimes get it wrong.

So if they tell you your business plans or your strategies have no chance of succeeding, maybe you’d be wise to get a second opinion—or even a third or fourth.

Sometimes you should listen to the experts

In the early 1980s, after Hawking had established himself as one of the preeminent minds in cosmology and physics, he decided to write a popular book—not an academic text—that would explain his ideas about the universe so a general audience could understand them.

After working on the book for two years, Hawking submitted his first draft to his editor at Bantam Books, Peter Guzzardi. Hawking was satisfied that he had succeeded in expressing these complex ideas in terms people could understand. But Guzzardi disagreed. He thought the book could still be simplified and asked Hawking to revise it, urging him to use clearer explanations. After much back and forth and many rounds of revisions, which Hawking found increasingly irritating, the book, titled A Brief History of Time, was finally published in 1988.

Of course, it was amazingly successful, rapidly becoming a #1 bestseller, a position it maintained for months. It ultimately sold about 10 million copies worldwide and was translated into at least 35 languages.

So, while there are times when you may want to take expert advice with a grain of salt, don’t be too quick to dismiss professional guidance from someone who’s trying to help you.

Discover what your market wants, and supply it

Why did A Brief History of Time become a bestseller? Because Hawking took complex ideas about the origins and workings of the universe, and presented them to people in a way that was easy to grasp and didn’t require any previous knowledge of cosmology or physics.

People obviously had a hunger and curiosity for this information, but academic texts and existing books weren’t providing it to them in a way they could easily digest, or was just too dry or boring in its presentation.

Find out what your customers are hungering for, something that no one else is providing them, and try to fill that need in a way that makes it easy and accessible for them.

Recognize your limitations and play to your strengths

As his ALS advanced, Hawking began to lose the use of his hands. He had been able to take down notes and write out complex equations on his chalkboard, even as using his hands proved increasingly difficult. So when he lost the ability to write, it was a potentially severe setback for his life’s work.

But even if he couldn’t use his hands, he could still use his mind, which was, after all, his greatest asset. He began to realize that he could think in more geometrical ways as he continued to work on the complex theoretical problems in his head, and this gave him an advantage that his peers didn’t have. “I tended to think in pictures and diagrams that I could visualize in my head,” he once said.

So even if you’re faced with limitations and challenges, you can still possibly find a way to succeed by playing to your strengths. For example, say you’re presenting a pitch to a potential client, and your competitors all have way more experience than you do. Okay, don’t play that card. You’ll lose. Instead, figure out what’s unique and valuable about what you bring to the table—creativity, innovativeness, flexibility, quickness, fresh ideas—and emphasize that as something you have over the competition.

Find the tools you need

The ALS also began to degrade Hawking’s ability to speak clearly. And after developing pneumonia during a 1985 visit to the CERN facilities in Switzerland, he had to have a tracheotomy, which took away his voice altogether.

If you think it’s sometimes difficult to communicate what you need to say, or get your point across, try losing your voice altogether and having to use a computer-generated voice to communicate, as Stephen Hawking did.

He could have just given up, but instead he searched for the tools that would allow him to do what he needed to do. Over the years, he was outfitted with a series of computer-based tools that allowed him to choose words and phrases, which were then read out by that now-famous computer-generated voice.

So whatever tasks you need to accomplish to operate your business, or whatever challenges or roadblocks you may face, don’t give up. There may be a tool out there that will help you. Search it out and learn how to use it.

Have a sense of humour

Despite having written about and theorized many mind-blowing concepts about space and time, Hawking believed that time travel to the past was not possible. In 2009, he decided to have a little fun with this idea by throwing a champagne-and-hors-d’oeuvres party. It was an open invitation—with a catch. He publicized the event only after it was over. That way, the only people who would know to attend the party would be time travellers from the future!

It came as a surprise to no one, especially Hawking, when nobody showed up for it.

Running a business is hard work and often highly stressful. Don’t forget to have a little fun and a few laughs as you go. It’ll keep you well-balanced, help maintain your mental health and keep you ready and energized for the work ahead.

It’s apparently said among lawyers, that you should never ask a witness a question that you don’t already know the answer to. That may hold true for the courtroom, but not for science.

In 2006, Hawking took to the Internet to ask an open question: “In a world that is in chaos politically, socially and environmentally, how can the human race sustain another 100 years?” He later added, “I don’t know the answer. That is why I asked the question, to get people to think about it, and to be aware of the dangers we now face.”

We all may sometimes feel self-conscious at conferences or networking events, especially if we get a chance to rub shoulders with some of the big wigs in our profession. If you have questions that are nagging at you, don’t be afraid to ask them. If your questions give your colleagues something to think about, you might be making an important contribution to your industry.

Asking questions is never stupid. Stephen Hawking spent his whole life asking questions, and he was a pretty smart guy. Be like Stephen.