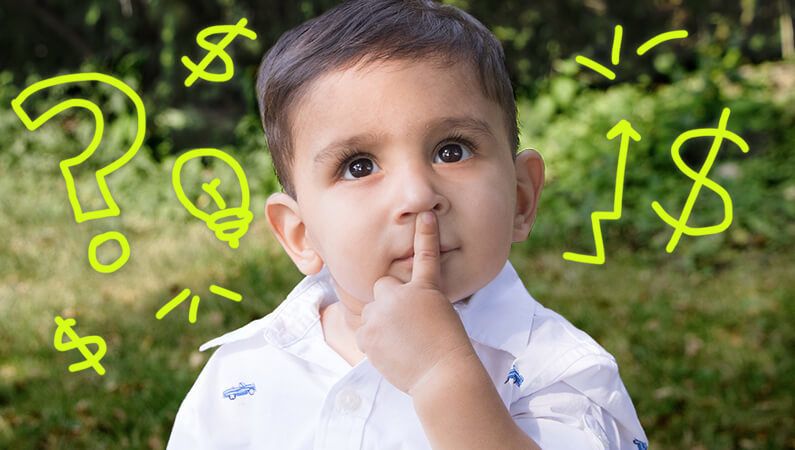 I’m sitting cross-legged on the floor of a sun-filled Toronto living room with Shamil, the 19-month-old savant poised to become the next big thing in the business world. After weeks of hype, I’m pleasantly surprised by the casual atmosphere; toys lie scattered about and diapers are stacked unceremoniously around the room.

Shamil’s mom lays out a simple snack of red grapes, string cheese and peanut butter filled celery sticks, a welcome change from the avocado-laden molecular cuisine I’ve become accustomed to at these kinds of interviews. Shamil, who has cultivated a reputation for impossibly high standards, flings an overripe grape across the room.

I’m keen to understand how he came to be the fresh face disrupting the diaper industry. After some light small talk (and one short, but vigorous temper tantrum), I ask his mother if there was a particular “a-ha moment” that kicked off his journey.

“It was really more of a series of moments than one in particular. We noticed he was frustrated a lot, throwing his toys out of his stroller, that sort of thing,” she explained.

“But it wasn’t until he developed his language skills more that we started to get a clearer picture of things. We realized then that it wasn’t frustration so much as passion. He just really hated his diapers, and he wanted to do something about it.”

Shamil had a lot of issues with diapers from day one. His mom tried every brand and style available, but none of them suited his needs. Today’s babies, she points out, have access to a lot of information on their iPads and through their vast social circles, so they’re becoming more discerning consumers. And the diaper industry is one that’s ripe for disruption.

How much have diapers really changed over the years? Sure, we’ve moved from milkweed wraps and animal skins in ancient times, to linen or cotton held with safety pins in the 1800s, to the modern disposable version most people use today. But, innovation has largely focused on absorption levels, or environmental sustainability, which is really more about the parents’ needs. What’s been missing, Shamil feels, is the baby’s perspective.

I ask Shamil to tell me about some of biggest things babies feel are missing from manufacturers’ designs. (It was a bit hard to hear his response from inside his blanket fort, so his mom paraphrased as follows):

“Think about it. It’s a complicated business model. You’ve got old people designing something to be purchased by parents—but the end user is the baby. When’s the last time any of those designers actually wore a diaper?”

He goes on in more detail, “What I was most interested in were two elements largely ignored by the industry: comfort and aesthetic appeal. I mean, we’ve put a person on the moon, created smartphones, and even built driverless cars. Yet, as babies, we’re still taking our first steps with bulky, awkward diapers hindering each movement. We’re still showing up to milestone events, like a first birthday party, with the telltale signs of an accident when we’re trying to make a fashion statement. It just doesn’t make sense.”

So Shamil—with help from his mom, who is herself a serial entrepreneur—got to work on tackling these issues. Together they started building a prototype for a diaper that would suit the needs of modern babies, while still being affordable and attractive to the parents who hold the pursestrings.

For inspiration, Shamil looked to the sportswear industry, where a lot of innovation has happened over the last couple of decades. He likes the way companies like Nike and Lululemon are responding to people’s lifestyles, with comfortable, fashionable and durable clothes that take people from the gym to brunch.

Shamil and his mom spent a year researching and testing diapers, working toward one that would satisfy him. The ultimate result is a new, highly absorbent, odour-resistant diaper with a sleeker, more modern silhouette, called Sleekstream. It’s going to be released to the U.S. and Canadian markets this summer.

Shamil tells me that the response from babies in the test groups has been overwhelmingly positive:

“They’re raving about how comfortable this diaper is, and how they feel more confident showing up to play dates in their best Baby GAP. And the parents can’t believe that it’s actually more absorbent than the industry-leading diaper, despite being so much thinner.”

He’s wearing one now, and it’s true, it is a sleeker look. He runs a few vigorous laps around the coffee table in an effort to demonstrate how the new design has improved his athleticism.

And it’s not just babies and parents who are seeing the Sleekstream’s potential. Shamil and his mom have received backing from several major VCs itching to get in on the ground floor of the next big thing.

As Shamil and I sit on the floor plugging pieces of brightly coloured wood into a puzzle frame, I can’t help but be completely in awe of this tiny wunderkind. After all, he’s poised to be a self-made millionaire before he’s even enrolled in junior kindergarten.

And he’s not stopping there. He and his mom are already in talks with a few major clothing designers about creating limited edition collaborations, and they’re planning to branch out with new product lines. He says some babies want simple, organic cotton at a lower price, whereas others want luxury fabrics and high-fashion designs, and they’re willing to pay for them. He wants to have something great in market for every baby.

What might be the most amazing thing about Shamil is the customer-first approach he’s taking to building his diaper empire. I ask him what he thinks will happen to the big players in the diaper industry if Sleekstream really takes off:

“Let me put it this way. They say that writers should stick to writing what they know. Well, I think it’s the same for creating products. Let me design for babies because I know what we truly need and want. And the adults? They can make adult diapers to their heart’s content.”

Happy April Fool’s Day! This is a fictional story—the characters and company are not real—but the baby is! For some real advice on running your business, check out the articles below.