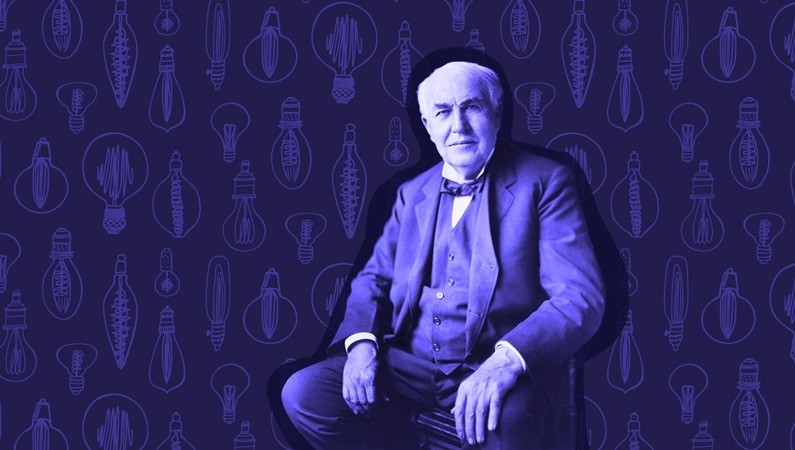 Great entrepreneurs from history: part one

A great entrepreneur is someone who has the vision and imagination to recognize opportunities. Someone who sees the commercial potential of new inventions, innovations, techniques and technologies, and possesses the wherewithal to translate them into new products, services or businesses.

With that in mind, we’ve put together our list of some of the greatest entrepreneurs in history. Maybe their stories will inspire you in your journey as an entrepreneur. And even though we’ve likely omitted some very worthy names (maybe your favorite?), we still had to split up our list into two parts. Here’s part one:

In 1862, when Thomas Edison was only 15, he learned to use a telegraph and landed a job as a telegraph operator. But what sets him apart is what he did with this new communication technology: he found ways to improve it, eventually patenting 150 improvements and selling the patents.

In 1876, he founded an industrial research laboratory in Menlo Park, New Jersey—the first of its kind. From here, the Wizard of Menlo Park, as he became known, and his team of scientists and inventors registered over 1,000 patents, many for inventions that were game-changers by anyone’s measure.

One of these was the first commercially viable incandescent light bulb. (You know that thing where someone has an idea and a light bulb appears over their head? You might say Edison invented that!) Others included the phonograph (the first machine that recorded and reproduced sound) and the kinetograph and the kinetoscope, early devices for recording and viewing movies, respectively, both the basis for what are now global industries.

But he wasn’t just an inventor; like a true entrepreneur, he saw the potential in new technologies. In the case of electricity, his “light bulb moment” was to build a business around it. The Edison Illuminating Company was the first company for generating and distributing electric power to businesses, homes and factories.

Thomas Edison was undeniably one of the most profound innovators and entrepreneurs we’ve ever seen, whose legacy changed the way we live our daily lives.

A former employee of the Edison Illuminating Company, Henry Ford didn’t invent the automobile, but he practically reinvented the automotive industry and, along the way, revolutionized modern manufacturing.

When Ford founded the Ford Motor Company in 1903, these new contraptions—aka “horseless carriages”—were expensive and extravagant machines that only the wealthy could afford. Ford saw a different future for the car. He wanted to build an automobile that everyone could buy.

After his first car, the Model A, failed to catch on, he came up with another model that was simpler, more dependable and cheaper to build. The Model T, available in 1908, was so successful that Ford’s factory couldn’t keep up with demand.

Ford had to find a way to ramp up production to meet the demand for the Model T. His solution, the moving assembly line, revolutionized the manufacturing process. The increased efficiency of this production method meant that Ford could shave the price of the cars even further, so that he could provide cars for the masses, and also so his employees could afford the cars there were building.

Henry Ford’s entrepreneurial vision for what the automobile could be, coupled with his ideas for how his business should be run, transformed his industry and created a $40+ billion company that has lasted for well over 100 years.

Walt Disney once said, “If you can dream it, you can do it.” If that isn’t the motto of an entrepreneur, what is?

Perhaps as a result of his own unhappy upbringing by his disciplinarian father, Disney’s genius as an entrepreneur was in recognizing that people need an escape from life’s hardships. He wanted to give people what they needed: happiness.

Disney was brilliant at recognizing new technologies that could be incorporated into his work to bring it to another level. He embraced innovation. For the short animated feature Steamboat Willie in 1928, starring Mickey Mouse, Disney took advantage of the new technique of adding synchronized sound to the animation, to great success.

Disney’s Snow White and the Seven Dwarfs was the first animated feature-length movie to be presented in Technicolor. Disney was told that the expense of the production would ruin him, but he stuck to his vision and took significant personal financial risks to make sure it got made. It was the most successful film of 1938.

But the incredible success of his production company, which eventually diversified into making live-action feature films and TV programs, wasn’t enough. He decided to create the biggest and most amazing theme park the world had ever seen. The ultimate “happy place.” Disneyland opened in Anaheim, California in 1955, later followed by Disney World in Florida, Disneyland Paris, Tokyo Disney Resort and Hong Kong Disneyland.

The Walt Disney Company is now the second largest entertainment enterprise in the world, with revenues in 2017 of $55 billion (USD). But it all grew from Walt Disney’s vision and entrepreneurial spirit to provide people with what they need, his willingness to embrace innovation and his determination to see his vision through to become reality.

In the same way that Henry Ford didn’t invent the automobile, Ray Kroc didn’t invent the concept of self-serve fast food restaurants. But Kroc saw a way to do it better and to take it further, which would ultimately create today’s fast-food industry.

After the Second World War, Kroc quit his job as a salesperson for the Lily-Tulip Cup Co. and bought the exclusive rights to market the Multi-Mixer, a machine that could make five milkshakes at once. He spent the next 15 years selling it to restaurants and drugstore soda fountains around the US.

One day, a tiny restaurant in San Bernardino, California ordered eight Multi-Mixers. Curious as to why anyone would need to make 40 milkshakes at a time, he went to see for himself. He arrived to discover a small, self-serve burger counter operated by brothers Richard and Maurice McDonald. There was no seating and the limited items on the menu—just burgers, fries, milkshakes and drinks—were prepared using an assembly line method that allowed orders to be filled in less than a minute.

Kroc saw the potential immediately. Though the story gets controversial here, he either pitched the McDonald brothers on the idea of launching a chain of similar restaurants, or after they had launched a few franchises themselves, Kroc partnered with them and eventually bought them out.

Either way, in 1955, Kroc opened the first McDonald’s franchise in partnership with the brothers in the Chicago suburb of Des Plaines. The efficient restaurant—kept spotlessly clean—was used as a model to sell the McDonald’s franchise concept around the country. By 1965, there were over 700 McDonald’s restaurants across 44 states, and it became the first fast-food business to go public.

So while Ray Kroc didn’t invent fast food, or even the original McDonald’s concept, it was his entrepreneurial spirit, his keen sense to sniff out something unusual, his vision (which included the idea that the customer experience should be consistent across all restaurants) and the persistence to make it happen, that grew the business into a universally recognized chain that now serves Big Macs in more than 120 countries.

Source: President Barack Obama awards the 2013 Presidential Medal of Freedom to Oprah Winfrey during a ceremony in the East Room of the White House, Nov. 20, 2013. (OFFICIAL WHITE HOUSE PHOTO BY LAWRENCE JACKSON)

Born into extreme poverty in Kosciusko, Mississippi in 1954, Oprah Winfrey rose from her humble roots, and survived childhood abuse at the hands of a male family member, to become a successful television personality and ultimately a media mogul.

Winfrey attended Tennessee State University on a full scholarship, where she studied communications and did some radio and TV work part-time. In 1983, she was hired to host a morning TV talk show in Chicago. Soon The Oprah Winfrey Show surpassed Phil Donahue’s show in ratings, and her career took off. The show ultimately became the highest-rated TV program of its kind ever.

But having a successful TV talk show isn’t what makes Oprah a great entrepreneur. She recognized that she had something to offer people—especially women—so she created more ways to serve that under-served audience, and try to make people’s lives better.

She started her own magazine, O, The Oprah Magazine, and launched Oprah.com, a lifestyle website for women. She founded her own production company, Harpo Productions Inc., which created, among other things, another daytime TV smash, Dr. Phil. Winfrey also co-founded Oxygen Media, which runs a cable television network dedicated to women.

What else? Well, she was the wealthiest African American of the 20th century and North America’s first black multi-billionaire. She’s been given the title “Queen of All Media,” and many consider her the most influential woman in the world. And despite her denial, talk persists that she may run for President of the United States in 2020.

Oprah’s basic life story—rising above her childhood poverty and dysfunctional upbringing to become a successful media personality—would have been impressive enough; but what really made her a great entrepreneur was her ambition and drive to continue pushing to reach her audience in new ways.

Stay tuned to see who will make Part 2 of our list of great entrepreneurs from history.